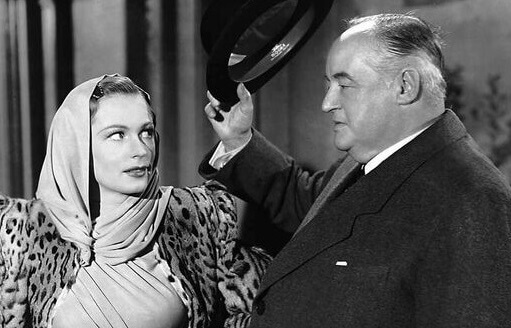 Three Strangers is a 1946 film that is set in 1938 London. Perhaps that setting of just before everything changes and new priorities come to pass is significant in the storyline and eventual outcome of the movie, but there is nothing in the story per se that links it to a particular time. The inkling we have that things are about to change dramatically is in the very characters of the Three Strangers themselves, for they are all single-mindedly self-absorbed and without any philanthropic considerations at all. Moviegoers are not compelled with much sympathy for these unappealing characters.

The Goddess of Luck and Fortune Invoked

The film begins just before midnight, as the Chinese New Year is about to strike. Geraldine Fitzgerald has brought two complete strangers to her flat. She believes in the Chinese Goddess of Luck and Fortune, and, according to legend, if three complete strangers gather before an idol of the Goddess, Kwan Yin, as the Chinese New Year breaks and make a common wish, Kwan Yin will open her eyes and her heart and grant them their wish. The Grand National is about to take place and there is a lottery for a possible winning ticket. The three agree to join together in the purchase of a lottery ticket, although only one of them can have his or her name on the ticket. In terms of their agreement, they put Ms Fitzgerald’s name on the ticket.

In gambling, or winning terms, a sweepstakes ticket at the time was much like a lottery. The Grand National is a huge horse-racing event in the UK that has always attracted millions of punters. In the sweepstakes, this works like an office pool or lottery, where the winner takes all. All the sweepstakes participants are designated a horse in the race, and if your horse wins, then you, as the sweepstakes ticket holder win a share of all monies staked on the race, and this generally amounts to millions. The luck involved in this system obviously dictates that you must also be holding the winning ticket, and in the case of the Grand National, the horse whose name appears on the ticket needs to win the race.

In Three Strangers, this sweepstakes ticket goes on to change everyone’s life quite dramatically. One of the three strangers, the lawyer, is on the verge of committing suicide when he discovers that the sweepstakes ticket he is a third owner of is in fact for the race favourite, Corncracker. This makes the winning of the sweepstakes ever so much more likely, and on the basis of this, abandons his suicide attempt.

Getting Their Just Dues Eventually

The doomed three strangers in the film are all manipulative and prone to greed discolouring their endeavours to acquire the money for themselves. The fact that all three have an agreement between themselves, and yet only one person can collect the money enables the Three Strangers film to create some devious plot twists and ultimately chronicle the demise of all three strangers. In their desperate scramble for the money, the characters in the film forfeit all decency and regard for one another to their own detriment, and ultimately even the sweepstakes win, because Corncracker does eventually win the race.